The Sun Never Sets on the DevOps Community 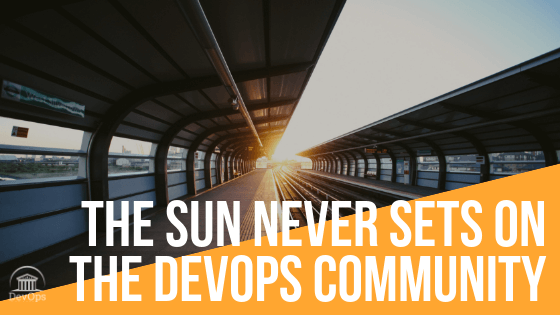 The Sun Never Sets on the DevOps Community

Why DevOps as an international movement is virtually unstoppable, and how DevOps Institute is facilitating its impressive growth.

As mentioned in DevOps Institute’s previous article on membership for Millenials, immediacy in IT’s current climate trumps all. The faster the better. That’s obvious.

What we as IT professionals often forget is that immediacy also implies closeness geographically, and the value of that closeness in DevOps is not to be diminished. With DevOps as an industry projected to skyrocket to a $12.85 billion market value by 2025, according to a study by Grand View Research, members of the DevOps community are forced to confront the vast and often intimidating reality that DevOps has gone global, and it’s not turning back.

That same Grand View Research study goes on to highlight Asia Pacific as the fastest-growing area contributing to DevOps’ rapid rise. As the Association for DevOps Professionals, DevOps Institute saw this as an opportunity to connect the fastest growing market in Asia with the arguably most established markets in the United States and Europe. What can those in the Asia Pacific region tell us about scaling quickly, and what can the American and European practitioners tell us about sustainability?

The solution to moderating and facilitating these important conversations between these often disconnected practitioners scattered about the globe is an Association, a common ground, a safe space where dialogue and continuous learning can take place. Over 20% of DevOps Institute’s current members reside in India — with the United States, United Kingdom, France, and Brazil following closely behind.

In what other line of work are we lucky enough to interact with people from such diverse and distinct geographical areas?

Membership with DevOps Institute crushes the silos that are our regional borders, and renders time zones obsolete. Break down the barriers less-progressive industries have stood up through our community Slack channel, Twitter, and various virtual events, join DevOps Institute and start a conversation heard around the world.