Women in Tech: 5 Things the Research Tells Us 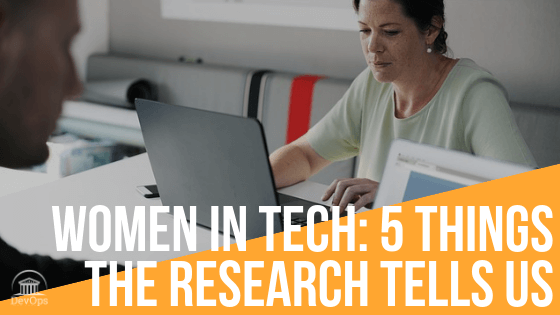 For women, working in tech can be a lonely business.

I recently had a job interview at a technology firm that employs about 150 people. I arrived a little early and asked to use the restroom before my appointment. The receptionist laughed a little nervously and explained that I would need to walk all the way to the far corner of the building. “All the other ladies’ rooms have been converted into men’s rooms,” she said. “There are just so few women who work here that it made more sense.”

This company isn’t that unusual. Depending on which study you read, women currently account for only 15%–20% of the tech workforce.

That underrepresentation results in some challenges. But you don’t have to take my word for it — researchers have uncovered a host of interesting statistics about what it’s like to be a woman working in a field dominated by men.

In a survey conducted by Indeed.com, 45% of women who work in tech said that wage growth was the number one career issue they face. And when asked why they had left their last job, 24.4% said it was because of slow salary growth. Other popular reasons included lack of career growth/trajectory (28.1%) and poor management (24.6%).

Harassment and microaggression are real problems.

That same survey found that 12% of women said that sexual harassment had been a problem for them. According to a McKinsey study, those numbers may be low. It found that 45% of women in technical fields had been sexually harassed.

Even worse may be the small, everyday instances of bias, sometimes called “microaggressions,” that women encounter. For example, 31% of women said that they needed to provide more evidence of their competence than others did, compared to 16% of men. Women were also about twice as likely as men to report being addressed in a less-than-professional way or being mistaken for someone at a much lower level than they were. The numbers were orders of magnitude worse for those who were the only women at their management level at their workplace.

Having more women on staff is good for business.

If these salary discrepancies, harassment, and microaggressions drive women out of the technology field, it isn’t just bad for womankind — it’s bad for business. A recent study published in the Harvard Business Review found that companies with above-average diversity had 19% higher revenues and 9% greater margins. In addition, companies that added more women to the management team increased revenues by an average of 2.5%.

Forbes puts out an annual list of the most powerful women in the world, and many of those women work in technology fields. Porch.com did an interesting study that analyzed these women’s public speeches using the IBM Watson Personality Insights API. The number one trait of female tech leaders (99.6%) was intellect. They also scored high for activity level (94.9%), adventurousness (90.6%), and achievement-striving (84.9%).

In short, these are the kind of people most people want to work with and for.

And the good news is that according to the Interop survey, pay for female tech staffers is rising faster than for men. If the trend continues, it could eventually eliminate the pay gap and possibly even entice more women into the field, which would be good for the entire industry.

And on a personal level, I decided to take that job — despite the lack of restrooms.